Confession time. This is me admitting to some deplorable conduct in my backyard.

I’ve committed genocide. Like all tyrants, I have a very good reason, which I’ll be happy to explain. You see, for the last few years something has been eating my flowers. The first year I assumed it was squirrels (see prior story).  The squirrels have since been acquitted, because I realized the real perpetrators were rats. And this year they started breeding…

We counted no less that five baby rats nibbling the fallen birdseed off the ground. At first is was cute, but then I realized the terrible future I (and my plants) were about to face. Although they had young’uns, and I sympathized with their family planning, I really couldn’t allow that kind of population explosion to continue. These had to die; they were disgusting vermin that carried disease, violated my plants, and seemed to be a variety of big-headed- overgrown mutants that rival the ROUSs (rodents of unusual size) from Princess Bride. 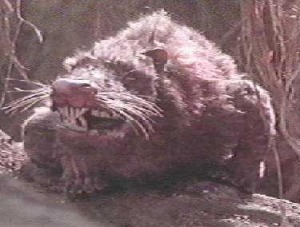 So, I bought some peanut butter flavored green-cubes-of-death and distributed them in the yard. Within a week I began seeing (and smelling) the result of my “cleansing.” 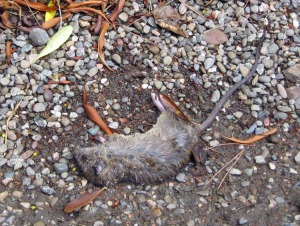 Success. But not for long.

You see, having joined the ranks of other tyrants, I realize there is always going to be another perpetrator of unwanted deeds. And they must die as well.

The new breed of ROUS lurking in the woods behind my garden has slightly longer legs, but is equally repulsive.

Don’t let the soft eyes and cloven hoof fool you. Deer are just rats with longer legs. Similar to the smaller version, these ROUSs are not deterred in the least by products claiming to repel them with noxious scents. I even bought some “deer proof” plants hoping they’d lose interest, and those were the first to go. Then I decided to put up physical barriers. Last weekend I crawled through the underbrush with my roll of plastic fence and staple gun, braving the thorns, ticks, and poison oak. Unfortunately, my plants continued to be nibbled, and they’ve just found another point of entry – which is even MORE overgrown and poison oak infested. I’m beginning to wonder if they are actually baiting me. If this is the case, the leggy ROUS has instigated war (on my turf), and this will not be tolerated.

So, I started to think about venison meat.

I started to think about venison, that is, until I read this article in Cook’s Illustrated. Poor Ryan Brown tried roping a deer like a young steer, only to have it drag him across the property, then pummel him with its front two hooves like a boxing kangaroo until he curled up in a ball on the ground, which only encouraged the enraged creature to jump up and down on his beaten carcass until he managed to roll under his truck for protection. Alright, so they’re not as docile and delicate as I had assumed. But being forewarned is being forearmed. I still have a bit of research to conduct: purchasing a cross-bow (I wouldn’t want to disturb the neighbors with a rifle shot), butchering techniques, and hunting permits within the city limits…

I have to wonder, though, is it still genocide if you eat the evidence?