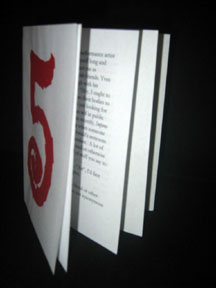 If I were to become a performance artist I’d first have to explain my güera complex.

Güera (wher-a): Spanish for a blond or otherwise fair complexioned person; not synonymous with “gringa” or Anglo.

I regret the fact that I’ll never go anywhere in the neighborhood where I grew up without looking like an outsider. I can’t yell “¡Viva la Raza!” without people looking at me…then laughing. This is my joke. I’d give myself a new middle name: Esperanza. The E is to make my initials and pseudonym (HRF) a complete word. Now it’s “Herf.” This would be my first act as a performance artist – conceived drunk with friends. They say that people are born with boring personalities because on the night of their conception their parents had boring sex. If my conception as a performance artist happens while I’m drunk, then it’s logical to conclude that I’ll be a drunken performance artist. This doesn’t have to mean I’ll be an alcoholic. Let’s just say that once you see the performances I’ll enact, I might as well be drunk.
So, Herf, the drunken performance artist will undertake many projects, exploring the nature of misleading appearances and cultural juxtapositions. Throwing white where brown is and vice versa. A one week glimpse might go like this:

Day One: Find a pickup truck with any car club name in the window and an airbrushed La Virgen on the hood. Chrome finish, candy apple red…ooh clean, vato. I’ll drive around the block a couple times. Once…then again, get the feel for my new ride. Then we start the music. Sub woofers in the back, distorting War’s “Low Rider” to an upbeat droll. This has always been one of my fantasies: When “they” (you know who I’m talking about: brown skin, seen holding up the walls). Anyway when they come squeaking up to the light, and you’ve already felt them coming. Windshield’s vibrating, who could miss it? You’ve gotta look. Don’t make too much eye contact. A quick glance is all; maybe you don’t even turn the head – just the eyes. You want to see what kind of inconsiderate hood wants to share his music so bad he’ll spend thirty grand on a damn heap just to trick it out. Me. That’s right. I want to be that hood for a day. Because you never look more than once when they are next to you (what if they’re packing?!) Scared; you check that the doors are locked and remember legends of some square who told a Vato to ‘turn that shit down’ and he never left the intersection. You’re scared, but you’re not scared of me. I’d get a second glance. I’d get double takes in my smooth ride ¿Y que? You think I need a tan to represent?

Day Two: Being faithful to la belleza de México I’ll form my own mariachi band. We’d be known as Las Herfs. Now, there have been other women in mariachi. There have even been non Mexican musicians. But the reason my band will be special is because we’d sing 80’s pop songs with the traditional accompaniment. The trumpet and violin solos would be killer. Our costumes would be hand-crafted by trailer park residents in Nebraska. We’d pay them two dollars an hour and maybe more if they weren’t pregnant all the time. They’d sew our vinyl mariachi suits. Although, we’d parade un-noticed on the streets of San Francisco: just another group of blue-eyed blond girls in vinyl mariachi regalia. The groupie following would be a modest smattering of tone-deaf bums and 11 year old girls. But just as we’re offered a record deal we’ll be exposed in a plot to exploit those fertile costumers by feeding them birth control in the form of vitamins.

Day Three: The group mentality of the mariachi band – having worn me out – makes me ready to work alone. Sola, just like Cantinfilas. For those unfamiliar: he waddled like a Mexican Charlie Chaplin, had incoherent conversations with others and ogled anything in a female form. Anyway, you might have seen him as a staple in Mexican cinema from the 1930’s to the 80’s or in some American’s yard as a cement lawn ornament. Yes, I’ve seen it. Bigger than a garden gnome, he’s got a little skinny mustache and baggie pants (before they were cool). Cantinflas pioneered the grunge look: thermal shirts with holes for the thumb and suspenders to hold up big pants. That wasn’t pinche Kurt Cobain that was Cantinflas. So I’ll go to Seattle. Spread the word about Cantinflas. With eyeliner ready for mustache drawing, I’ll walk the streets of Seattle. Every one I see dressed like they’re stuck in 1992 I’ll liberate by offering to draw a skinny Mexican mustache on them. The truth of Cantinflas should not be kept down. I’ll preach and educate the greater Pacific Northwest of European decent. Teach them the truth of their cultural appropriation. The Seattle art scene will commemorate my performance by thereafter referring to any skinny mustache as a ‘Herf’.

Day Four: My fourth incarnation will be as “Che.” Yes, THE “Che.” Now that we’ve all seen that motorcycle movie don’t we feel better wearing the hats and the T-shirts? ¡Chingón! I’ll show you what he was working for. If I re-introduced Leprosy to the first world, you might want to go ‘Red’ yourself. The Leprosy I’ll introduce will be a new strain focused in the Navajo Nation. Not controllable by traditional methods of treatment, I’ll call it the Thriller strain. Thriller, as inspired by the life and work of Michael Jackson. This particular strain of Leprosy will cause victims to lose all melanocytes in the first stage of the disease. Thus, losing their swarthy complexion. Now, pale skinned and ostracized by the community, reverse racism will be strongly correlated with the presence of Thriller Leprosy. The second reason we’ll call it as we do is the eventual loss of extremities – much un-like those nimble zombies in Jackson’s music video. Little known fact is that they had to use dancers in special make-up because the first cast of re-animated corpses just couldn’t grasp the choreography – literally. There were necrotic limbs and ears all over the place; it wasn’t a pretty sound stage.

Day five: A long week of overcompensating for my color will make me want to reconnect with some familiar pass-times. I’ll nap most of the day, drink a few beers and sit on the porch steps of a home in an upper-class gated community. I’ll pick up a Popsicle vendor from the other side of town and ask him to walk that jingly-bell cart up and down the street. I’ll whistle at him and talk too loud, making no secret that I’ve been drinking all day and have no intention of slowing down once it gets dark. He and I, we’ll hang out, watching the cars go by and waiting for one of the neighbors to get in a fight or have the cops called on them. Now that’s dinner and a show, puto. While we wait for something to go down, Jesus the Popsicle vendor, and I will drink, planning future “Arte” by Herf.