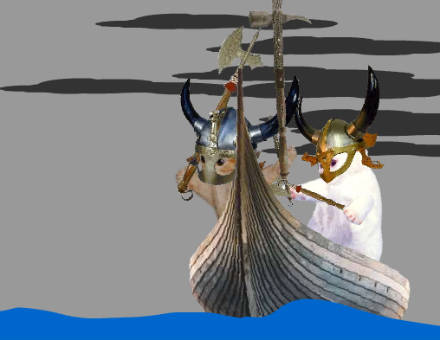 I want to be a Viking. I want to say I enjoy sacking, pillaging and plundering in my spare time. I’d take great pleasure in walking into a room and announcing “The Viking has arrived!!”, not because I’m from the Northern lands but because I choose to be. To watch the terror and abject fear those four words would create on the faces of others would make me very happy. When I would be introduced to people they would say “This is Heather, she’s a Viking”. Or, it would be nice to be identified as more than just “that girl with the curly hair” but “you know, THE VIKING”. If I really wanted to, I think I could be a Viking. I’d read ‘Hagar the Horrible’ every week. I could buy a duck and name it ‘Kvak’. Maybe wear a helmet with horns on it everyday. I’d gain 50 lbs, dye my hair blonde, braid it and sing opera while I wear the helmet. Then I’d have Viking expeditions and victoriously return home with what ever the Salvation Army gave me. Imagine the pride my family will feel when I come home adorned in olive green army blankets and cheap costume jewelry. I could rename myself “Heather D. Barbarian”, have it legally changed and get mail addressed to Mr. or Ms. Barbarian.
“Congratulations Ms. Barbarian, You and your loved ones may be the next Publishers Clearinghouse millionaires! Imagine: your face next to Ed McMann’s as he announces that you, Heather D. Barbarian, are the next Publishers Clearinghouse winner!!”
I’ll be cooking reindeer on a spit in my back year and burn all that mail in the bonfire beneath it. But if Ed McMann’s showed up at my door I’d be waiting for him on my roof with spears and arrows, then I’d cook him on the spit and feed him to the dogs. The media would go wild with news that there was a Viking resurgence in the United States. But none of the reporters would come near my property for fear of my wild dogs and bloodthirsty kvaking ducks. I’ll make a pilgrimage to Minnesota and learn to speak with a Norwegian accent, and when I return I’ll be an even more effective Viking. All the nation will tremble at the name “Heather D. Barbarian. No small town would be safe from my wrath. I would be called “Heather the unstoppable” and “Heather the ruthless” until the mere rumor that I was on my way would stop towns in their tracks and make them surrender immediately. I will be a benevolent Viking, I will not implement any changes in the lifestyles of my conquered territory. They must simply pay homage every month to my barbaric strength and tremble when I storm into a room and announce:

“I am Heather D. Barbarian, sacker of small towns and pillager of those who like to be pillaged; anyone with an objection to my glory may face me and witness my wrath!!!!!”
My empire will be purely narcissistic and all cowering or shrieks of terror in my presence will be rewarded greatly. Worship will be accepted at any hour of the day or night and anyone who does not pay due respect to my grandeur will be shunned for several days until I forget why I was mad. Come to think of it, not much would change between now and how I would act as a Viking. I think I am a Viking. I sack, pillage and plunder on the weekends, and you will believe me or be banished from my Viking territory. I am a Viking! I can tell everyone I meet that I am, in fact, a Viking, and if they praise my Viking strength I’ll be their friend. Children at day care will play “Viking” and argue over who gets to be Heather. Thus, the legend would live on forever in hearts of many as “Heather…the Viking.”