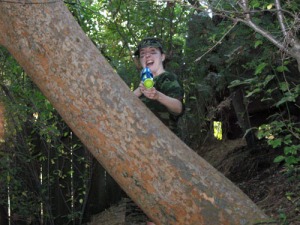 This summer whenever I would go outside, expecting a pleasant sit in my garden, I would be shocked to find that it had been raided. This creature began by eating my flowers. Correction, he did not simply ‘eat’ my flowers, he defiled them. One day I noticed a certain pansy was smaller than it had been the day before. The following day it was even smaller. Whatever was eating my lovely flowers did so methodically every night; he violated them nightly and left the remains for me to find the next day. Day after day my pansy was getting smaller and smaller. Within four days it had been devoured to half-inch nubs retreating back to the soil. 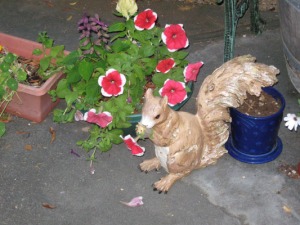 I went to the garden store asking for help with my pest problem. The friendly man in a wide-brimmed sunhat told me the name of my foul foe: Squirrel. He said that it’s a bit of a challenge to combat them but I might try some black pepper granules. “They don’t like the smell, and it burns their hands a bit if they start digging in it.” This sounded good; it seemed humane, and I really didn’t want to hurt anyone (yet).
So I sprinkled my pepper everywhere: the dirt, the edge of the pots, and the concrete surrounding the pot. I even put pepper on top of the fence in case he was thinking to make an aerial attack. And then I waited… For three days my garden seemed safe.
But then the damned tree-rat hurt me in a way no one ever has: he ate my tomatoes.

One of my precious heirlooms had been drawn and quartered in the night. I found him hanging by his support stocks on the fence; the upper three feet of his body was severed six inches from the ground.
I knew I had to take drastic measures. This was no longer a simple decorative flower war. This insolent spawn of nature was threatening my food supply. My caprese salads would be compromised for the rest of the summer if I didn’t stop him immediately. So I put on my big girl boots and I waited. 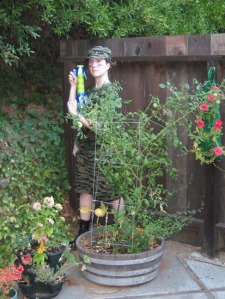 I’m sure you don’t need my narration any longer. You know how this will end: The good and righteous will triumph (that’s me), and the wicked will perish. Let this blog post be a warning to any other squirrels reading: don’t fuck with my food. 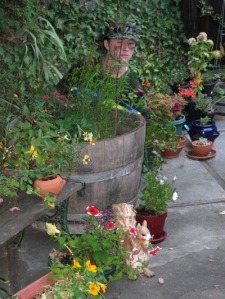 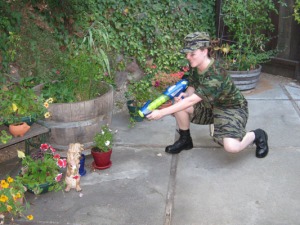 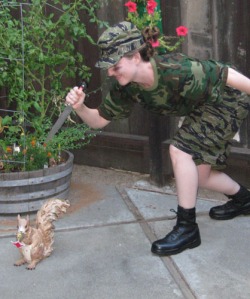 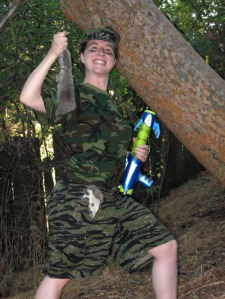 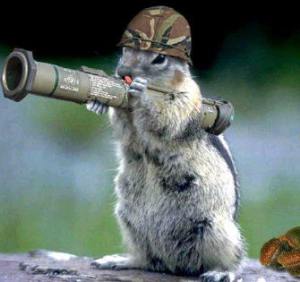